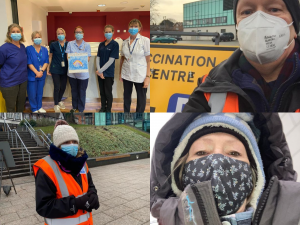 Over 800 volunteers went out into the community, rain or shine, to facilitate the vaccine roll-out.

Among them was Warren Tebbit, who worked a remarkable 87 shifts as a volunteer for Pro Care during Covid-19 (and he still plans to do more in the future!). Warren and his wife, Kate Tebbit, were inspired to volunteer, as their “daughter was in her final year of her Nursing degree and along with many fellow nursing students, she was facing first-hand the horrendous impact of Covid while on placement at the Royal Papworth Hospital.”

Although he initially worked two to three shifts per week, Warren said that he was “soon spending up to five to seven days a week at G-Live.” Volunteering every day of the week is a huge commitment and was recognised by the local community who offered up their support. This came in the form of bringing in “cakes, fresh fruit and snacks and one very generous local restaurant even provides a weekly Friday lunch.” The restaurant that Warren is referring to is Rumwong Thai Restaurant and “for many weeks the owner and his staff would bring over a large selection of meals on Friday lunchtime as a thank you for the work of the Vaccination Centre. It was really appreciated by everyone and the dishes were excellent.”

Phillip Kemp (Associate Director of COVID Response at Procare) is equally grateful for the volunteers’ help, writing that they “have been a vital part of the success of the vaccination programme in Guildford & Waverley – Throughout the duration of the programme at Cranleigh, Haslemere and in G-live – they have been an integral part of the team which has helped deliver over 160,000 vaccines since it opened in December 2020. With their wide-ranging and diverse backgrounds, they have brought an enormous wealth of experience to the programme which everyone involved has benefited from. They have helped guide members of the public through our venues with care, compassion and humour and they’ve done it in all weathers. Without them the service wouldn’t have been half as successful as it has been, nor half as fun. Thank you for all of your hard work”.

Mayor, Cllr Marsha Moseley, also expressed her appreciation, writing that “it has been so inspiring to see the commitment and sacrifices made by volunteers to help their communities during one of the most difficult periods of our lives. We have been touched by their kindness, generosity of spirit and endless enthusiasm. They have really gone above and beyond…our NHS and volunteers across our borough’s vaccination centres have played such a big role in helping to keep our residents safe and to stop the spread of the virus. Thank you to everyone who has made the biggest vaccination programme in this country’s history such a success.”

The Mayor has also shown her gratitude by inviting the volunteers to the Guildford Cricket Festival 2021 which took place on Tuesday 27th July.

All of the volunteers that I spoke to had one thing in common; their charitable acts came from a desire to help others. Peter Robotham, for example, is a volunteer who actively sought out ways to help his community during the COVID pandemic. After searching online for volunteer roles, Peter found that he could support his local vaccination programme, a role that he thoroughly enjoyed. With the everyday bustle of patients in socially distanced queues, Peter was grateful for the social element which came

along with the role after several months of isolation. Meeting hundreds of people per day who were “very purposeful” in getting the vaccine to protect themselves and the public, was inspiring for Peter. From organising queues to helping the patients remain calm, Peter and the other volunteers contributed to the united effort of vaccinating the nation. Peter remained humble, however, as he took the time out of our conversation to praise the NHS workers who were responsible for vaccinating patients. Peter said that “though they have full-time jobs, they do extra shifts to help out” and had to concentrate on and listen to hundreds of different patients within their shifts. Howard Klein echoed Peters pleasant experience as a volunteer, writing that, “The opportunity to help people makes the work worthwhile, and so many saying thank you.”

Volunteering often entailed identifying and comforting individuals with needle phobia. Howard stated that “sometimes those afraid of a needle are more obvious, but not always, so a bit of eye-contact/small- talk can help.” Therefore, the volunteers had an impressive range of interpersonal skills and were instrumental in allowing the vaccination programme to run smoothly. Some of the volunteers also had some funny encounters to share with me when we spoke. Ali Johnson, for instance, recalled a “man telling me that he was 52 when the over 50s were called forward only to confess he was 49 when he got inside.”

Ali also emphasised that there is a shortage of volunteers nationwide – an issue that many of us are able to solve by finding roles within our communities to aid the vaccination programme. After hearing the inspiring stories of some of the volunteers, we should all strive to assist our communities in similar ways.

Find out how you can volunteer by visiting MyImpactPage – Voluntary Action South West Surrey (betterimpact.com)

Statistics are from January – March 2021 (inclusive).